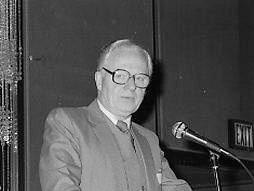 Broderick, James J., 93, of Cape May Court House, NJ, was born in Brooklyn, New York on September 14, 1920 and died on June 10, 2014. He attended St. Alphonsus Elementary School and Brooklyn Technical High School, graduating in 1938. He worked several jobs and tried out as a pitcher for the Giants before starting night school at Cooper Union in New York City. After a stint in the Army during the war, in which he received the rank of Lt., he completed a degree in Chemical Engineering at Cooper Union in 1949. Mr. Broderick went on to become a foremost Flavor Research Chemist in his field. Among his many honors and professional associations, he was a charter member and past President of The Society of Flavor Chemists, and received their “Man of the Year” Award as well as the “Golden Blotter Award”. He received the “Richard Hall” Award for his work on the Food Additive Committee of FEMA. He was a prolific writer, including a series of articles entitled “Before I Forget” written for the “American Perfumer and Flavorist”.

Mr. Broderick was an avid singer and was a member for many years of the Wyckoff Male Chorus, as well as choirs at St. Peter the Apostle Church, in River Edge, New Jersey, and the chorus at his senior living village in Lakehurst/Manchester, New Jersey.

Mr. Broderick was predeceased by his bride of 69 years, Patricia Callahan Broderick. He is survived by his three children, Kevin, Patricia, and Bryan, as well as four grandchildren and two great grandchildren. A Memorial Mass will be held on Saturday, September 13, 2014 at 10:00 a.m. Interment will be in the Cape May County Veterans Cemetery.