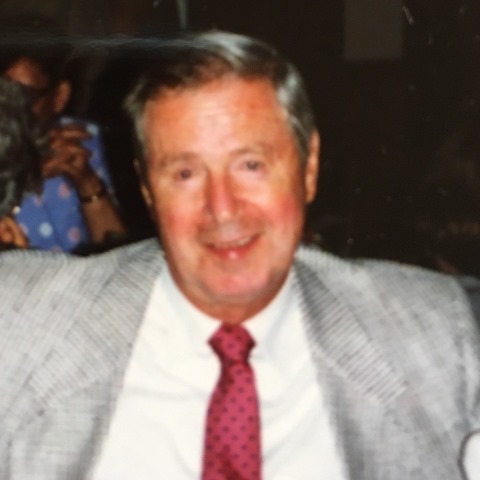 William J. Downey Jr., one of relatively few remaining veterans of WWlI, enlisted in the US Army in 1944 at the age of 18 following his deep sense of patriotism, which became his credo throughout his life. He was responsible for training soldiers at Fort Bragg, NC. Many members of his Division eventually participated in the fighting at the Battle of the Bulge. He would have tears in his eyes when he spoke about the lost lives of his fellow soldiers and showed compassion, grief, and guilt for not being with them in battle.

Bill Downey finished his remarkable life on Jan. 30th at the Hospice Hospital of Shell Point in Fort Myers, Florida. His failing heart could no longer sustain him. He was 89.

He was born in Cranford, New Jersey in 1927. From an early age Bill acquired and demonstrated wit, intelligence and talent in negotiating, persuading his fellow high school students to cease fighting using his already brilliant logic and reasoning. At age 7 he started playing the piano and never quit practicing. His sight-reading skills enabled him to play instantly from any sheet of music put in front of him. He developed a great appreciation and love of classical music and art, and accumulated a deep knowledge of many composers, artists and their creations. For almost 15 years he served on the classical music committee of the Big Arts cultural center on Sanibel Island, Fl where he resided with his wife Yola.

In high school he became a voracious reader of history books and his love for reading stayed with him his entire life. He had an amazing steel-trap memory to the very end, which he demonstrated in many conversations and discussions with family, friends and colleagues. He participated in many high school sports, and he was captain and quarterback of the school football team.

Following graduation from Seton Hall University with a degree in chemistry, he joined Fritzsche Dodge & Olcott, (FD&O) one of the oldest flavor and fragrance houses in the USA. There, he began his professional career as an analytical chemist and later advanced to the unique position of a flavor chemist. His creative acumen and acute sense of taste and smell made Bill Downey a “legend” in the industry. He managed the development of the original flavors for new beverage products, the essential effort he put in creation of flavors used for the first line of Snapple Iced Tea and Juice beverages. During his career, he developed flavors for many consumer products including alcoholic beverages, i.e., cordials and beer, tobacco products, dairy products and candies. He advanced to Vice President, Flavor Sales Manager and New Product Development Manager.

FD&O was sold to the German chemical manufacturer BASF Corporation, and subsequently sold to Givaudan Flavor and Fragrance Corporation. Bill worked for more than 50 years in the flavor industry, retiring from BASF and Givaudan. In retirement, he consulted for the flavor, food and beverage industries until age 85.

Bill Downey demonstrated his commitment to the flavor industry during his career. He served on the Board of The Flavor Extract Manufacturers Association (FEMA) and was President of FEMA from 1986 to 1987. He was influential in promoting and improving the regulations for alcoholic beverages. His efforts ultimately improved the flavor profile for alcoholic beverages and taste to the consumer.

He was President of The Society of Flavor Chemists (SCF) from 1966 to 1967, and helped build the foundation for the organization that it is today. He was one of the pioneers of the flavor industry, a great friend to many colleagues and customers.

Bill had a wonderful personality and was an inquisitive and engaging person. He was a renaissance man in that he was educated and knowledgeable on many subjects and had a broad range of interests in many fields. His quiet grace, his ability to command any gathering with his artfully articulate stories and his highly respected reasoning were admired by many. He possessed a great dry and situational sense of humor.

An avid bird watcher and animal lover, he named the birds that frequently visited his home on Clam Bayou: the great blue heron was Edgar, the yellow crown night heron, Jimmy, and there were many others.

Bill loved nature and was a deer and rabbit hunter and fisherman. He played golf and loved to paint. He was an excellent writer with keen insight into the human soul.

Bill is survived by his wife of 30 years, Yola Downey, daughter Susan Smith of Rhode Island, son William R. Downey of New Jersey, and his only niece Carol Vosseller of New Jersey. He has nine grandchildren, 3 grand nieces and 5 great grandchildren. He was predeceased by two daughters who battled breast cancer, Dale Brown and Diane Genovese.

Following private interment, a Memorial Service will be held at the Captiva Chapel by The Sea at 11:00 a.m. on February 21st.