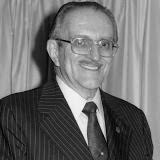 Albert V. Saldarini, of Nutley, passed away on Friday July 15, 2016. Born in Union City, NJ and raised in North Bergen, NJ, he came to Nutley in 1959. Mr. Saldarini was Director of Research and Development, Flavor Division with Norda Inc. in East Hanover before retiring. He was a member and past president of the Society of Flavor Chemists. He attended the Brooklyn Polytechnic Institute and was a member of the Nutley Amateur Radio Society, the Nutley Civil Defense and a volunteer with the Nutley Chapter American Red Cross.
He was a proud World War II Veteran, serving with the Army Air Force’s 450th Bomb Group and 1st Combat Camera Unit, under Squadron Commander Ronald Reagan. He participated in the air offensive as an aerial combat photographer throughout the European Theater and was awarded the Air Medal, the Distinguished Unit Badge, and the European, African and Middle Eastern Service Medal.
He was an avid HAM radio operator and camper introducing the love of the outdoors to his children during their 3 week long summer vacations traveling from Canada to the Florida Everglades, packing gear, children and wife Jean into a Volkswagen Beetle.
Albert is survived by his beloved wife of 65 years Jean (Homolak) Saldarini, his son Albert V., Jr. and wife, Laura, his daughter, Nancy Saldarini and his loving grandchildren, Nicholas, Erin and Bryce. He also leaves his sister, Joan Rufo.
A service will be conducted at the S.W. Brown & Son Funeral Home on Wednesday July 20 at 10 am followed by burial at Fairview Cemetery, 500 Fairview Avenue in Fairview, NJ.
Visiting will be at the funeral home on Tuesday July 19th from 5-8 pm.
In lieu of flowers, memorial contributions to the St. Jude Children’s Research Hospital or the Children’s Hospital of Philadelphia would be appreciated.

Provide comfort for the family by planting a tree in memory of Albert V. Saldarini, please visit our Heartfelt Sympathies Store.