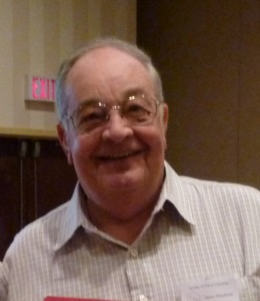 Jim Marchioni graduated from Fairleigh Dickenson University with a Bachelors Degree in Marketing.

He joined the Givaudan Fragrance division in Clifton NJ at the bottom of the corporate ladder. He worked in the sample room, in accounting and in inventory. Along the way he systematically taught himself to identify the organoleptic properties, countries of origin and analytical specifications of flavor and fragrance raw materials and developed a unique method for demonstrating the efficacy of natural and synthetic products in both flavor and fragrance applications.

After nearly 20 years with Givaudan he joined Robertet as Account Executive. After a few years Jim was promoted to Vice President and General Manager of the Natural Ingredients Division of Robertet.  In 1999 he retired after more that 25 years with Robertet.

Over the years Jim became the expert in Flavor raw materials.   He led training lessons to develop Data Sheets and tasting sessions. These sessions became of legendary importance. For instance he would take 3 to 5 natural botanicals or natural chemicals, and would taste a commercial product with and without his composition.

Jim Marchioni has taught and influenced several generations of flavor chemists with his knowledge and demonstrations.  He became a major asset to our industry and our Society and was elected an Honorary Member of the Society in 2012.