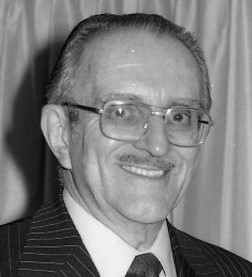 Presented by Chairperson, Dolf DeRovira, in 2002

Born in Union City, NJ and raised in North Bergen, NJ, he came to Nutley in 1959. Mr. Saldarini was Director of Research and Development, Flavor Division with Norda Inc. in East Hanover before retiring.  He was a member and past president of the Society of Flavor Chemists.  He attended the Brooklyn Polytechnic Institute and was a member of the Nutley Amateur Radio Society, the Nutley Civil Defense and a volunteer with the Nutley Chapter American Red Cross.
He was a proud World War II Veteran, serving with the Army Air Force’s 450th Bomb Group and 1st Combat Camera Unit, under Squadron Commander Ronald Reagan.  He participated in the air offensive as an aerial combat photographer throughout the European Theater and was awarded the Air Medal, the Distinguished Unit Badge, and the European, African and Middle Eastern Service Medal.
He was an avid HAM radio operator and camper introducing the love of the outdoors to his children during their 3 week long summer vacations traveling from Canada to the Florida Everglades, packing gear, children and wife Jean into a Volkswagen Beetle.   — info taken from https://www.swbrownandson.com/memorials/albert-saldarini/3512596/obituary.php

Al was a past president of The Society of Flavor Chemists and, for many years, the Society’s photographer.  Many of the photos in the archive were taken by Al.  There are only a few where he is in front of the lens.

Al’s career included being an organic chemist, flavor chemist, and technical director at Norda where he was a mentor to several flavorists.  Al was also a founding member of what would become the Chemical Sources Association, chairing the Flavor Chemical Committee of the SFC.  Al was instrumental in developing carbohydrate encapsulation of difficult compounds like acetaldehyde.  Al enhanced both the technical and social arenas of our industry.

Al was an aerial photographer with the Air Force in WWII.  Many of his combat photos in Italy and North Africa can be found on the internet, including the official page of the 450th Bomb Group Memorial Association’s page for their 1st Combat Camera Unit.

Here is an interview with him about flavor creation in Mother Jones from 1979.

Thanks to Jerome Lombardo for providing this information.